I had the good fortune to spend a delightful weekend in Paris at the Maison&Objet. This was my first trip to Paris and to the show, so I was a wide-eyed observer to all things beautiful! It was Fashion Week and a city with an eye for fashion second to none had their eye even more finely focused on home fashion. After a flight cancellation that had me arrive a day late (and a dollar shorter!)

I went directly to the show from the airport on one of the show shuttle buses provided. Maison&Objet is huge and every vendor creates a space that is distinct and unique to their style and brand. What was noticeably new were finishes – lots of opalescent, shell finishes – both as a 2 dimensional surface and 3 dimensional objects. And the European commitment to the environment was in high gear with sustainable products and materials, and product functions.

I took the RER from the show into the city with fellow design industry expert, author, and business consultant, Lloyd Princeton. It was another first for me to spend time with him and to learn about his current business focus of putting designers and developers together on very large and often commercial and international projects.

After an afternoon at the Louvre, spent the cocktail hour in this charming section of Paris. In response to the high cost of showing at Maison&Objet, the design showrooms in Rive Gauche created their own market show: Paris Décor Off. Textile showrooms such as Osborne & Little and Manual Canovas introduced their Spring collections. O&L showed bold, transitional patterns and colors on one end of their spectrum, and graphic illusions in subtle colors on the other end. I toured this lovely part of town with Eric Portnoy and his wife Lucia, Boston natives with a pied a terre in Paris. Eric is an expert and importer/exporter/collector of 20th century, classic modern furniture such as Jean Prouve, Charlotte Perriand, Pierre Jeanneret, Charles and Ray Eames, George Nelson. 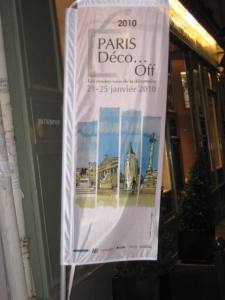 And if that wasn’t enough, Troy Henriksen, an ex-Pat painter extraordinaire, graciously hosted an afternoon and evening in historic (isn’t everything?) Monmarte, the hilly section of town that was home to fabulous and famous painters from the last 3 centuries. Troy has become wildly successful in Paris, a place where being an artist is still considered impressive and a life well lived. His paintings are graphic and descriptive collections of personal and cultural perspectives, with a humorous edge. Google him, and start collecting his work NOW before his popularity sweeps across to this side of the Atlantic!

Upon checking out from my charming and oh-so-helpful hotel La Demeure on the edge of the Latin Quarter, I learned that the September Maison&Objet is really the show to attend…or maybe he just wanted me to come back! So I will, and hope the dollar/Euro ratio is more in my favor then! Care to join me?

3 thoughts on “Returning from Masion&Objet in Paris”

Get a free 15 minute business consultation!

"Just got off a call with @JodySeivert! She's one to chat w/ if you are serious abt growing your design biz! #FullSteamAhead"

"Your free 15 minute coaching session is a golden nugget that any designer would be remiss if they allowed the opportunity to pass them by. I genuinely appreciate your attention to my business conundrum and your validation to what I was also doing right! I will return soon as a paying customer in the near future!"

*If you need a second set of eyes or ears on your business or your sales process, please drop me an email or pick up the phone and call me. We can accomplish a lot in a small slice of time! -Jody